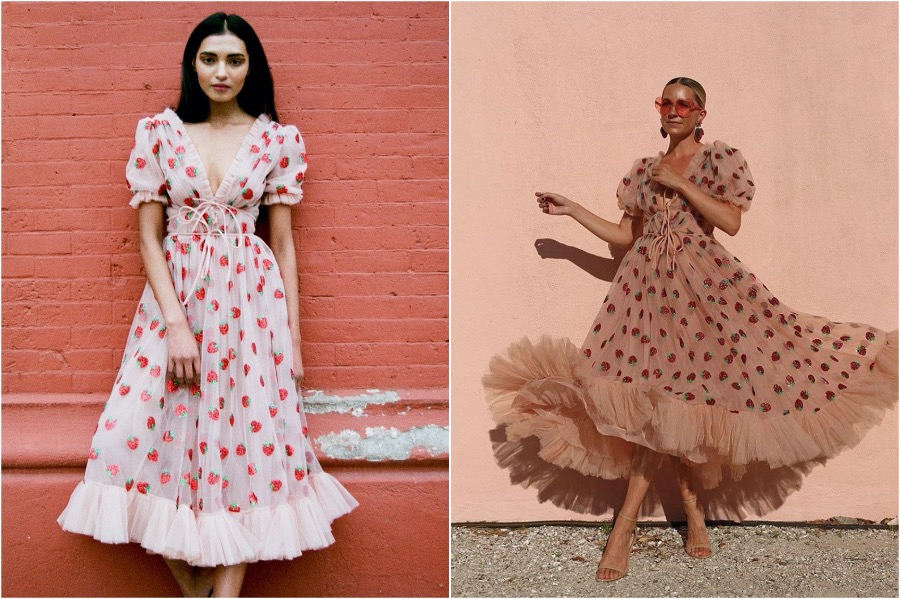 You’d think the middle of a worldwide pandemic wouldn’t really be a time when people cared about fashion or bought expensive trendy items of clothing. You would assume this is the time we’d try to save money, live frugally and try to be as practical as possible, considering the fact that we have nowhere to go, we’re all stressed and the economy is crashing left and right. But you’d be wrong. Clearly trying to predict what would and would not happen in a pandemic is a tricky thing to do, because how can you expect people to act a certain way in a completely unexpected situation. Summer 2020 will probably be forever associated in our memory with cancelled trips, social distancing and the strawberry dress.

Yes, that strawberry dress you’ve been seeing all over social media. You probably don’t even know where it came from and why it’s so popular all of a sudden. And we’re here to clear up the confusion and attempt to analyze why such a fancy dress became so popular in such a weird time.

So let’s start at the beginning. This strawberry dress was designed by Lirika Matoshi, a Kosovo native now based in New York City. Matoshi is a young fashion designer who has no formal fashion education but clearly, that’s not stopping her. She started out with making chokers by hand and selling them on Etsy in 2016 and now she has a successful business selling apparel and accessories. It’s a small business, but all the employees are women. The business is based in New York, but they also use a factory back in Kosovo for the production of goods. The overall style of Lirika’s creations can be described as frilly, whimsical, romantic yet sophisticated.