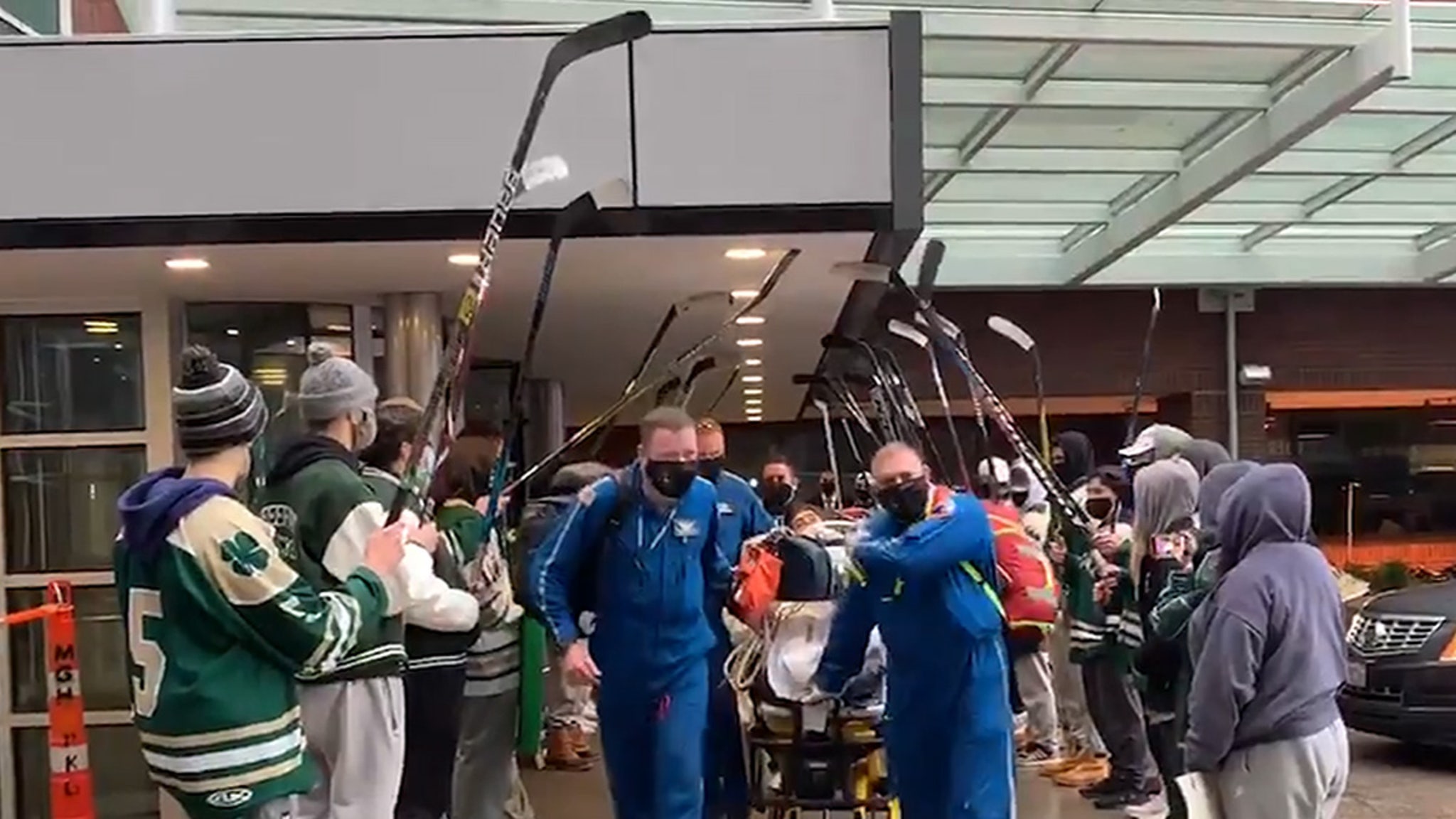 H.S. hockey player A.J. Quetta — who suffered a serious spinal cord injury during a game last month — was transported to a rehab center for further recovery this week … and his teammates gave an incredibly emotional tribute along the way.

As we previously reported, Quetta — a senior at Bishop Feehan HS in Attleboro, MA — underwent emergency surgery after he slammed head-first into the boards during a game on Jan. 26. It is unknown whether he would be able to move his body again.

Now, Quetta is heading to a rehabilitation center in Atlanta for further treatment … and his teammates decided to give him a pretty awesome show of support as he made the journey.

The players grabbed their jerseys and sticks and headed over to the hospital to meet Quetta as he left the building … forming a tunnel for their teammate as he departed to his next destination.

Members of the @BishopFeehanHS hockey team are at MGH to see their teammate, AJ Quetta, off as he heads to Atlanta for treatment. #WCVB pic.twitter.com/cdqQwQlzoN

The players also had signs thanking the workers at the Massachusetts General Hospital and showing encouraging messages for Quetta.

There has been an outpouring of support for Quetta following the tragic incident — The Boston Bruins hosted a raffle for his cause that eclipsed its largest jackpot ever at $300,000 … and New England Patriots owner Robert Kraft donated $25,000.

What a beautiful moment. A.J. Quetta’s teammates at Bishop Feehan just showed up at 6 a.m. at MGH to help send him off to Atlanta for his rehab.#AJsArmy @AJsArmy10 #WBZThisMorning pic.twitter.com/hASmsVdStC

A.J.’s father, Anthony Quetta, Sr. thanked everyone for their support on Monday … saying, “Words can’t express our steadfast appreciation to all the donors during this time. This would not be possible without all the support we have received.”

ATTENTION #AJsArmy: AJ is moving to his next step to recovery tomorrow & flying to Atlanta. AJ and his family want to thank the AMAZING Mass General team. They could not have gotten here without all of your support. From the Quetta family “Thank you to the Angels of MGH PICU! pic.twitter.com/mwyGXb3kti

“AJ realizes how awesome and incredible the support has been. He is determined to beat the odds and return to his family and friends. He is very motivated.”