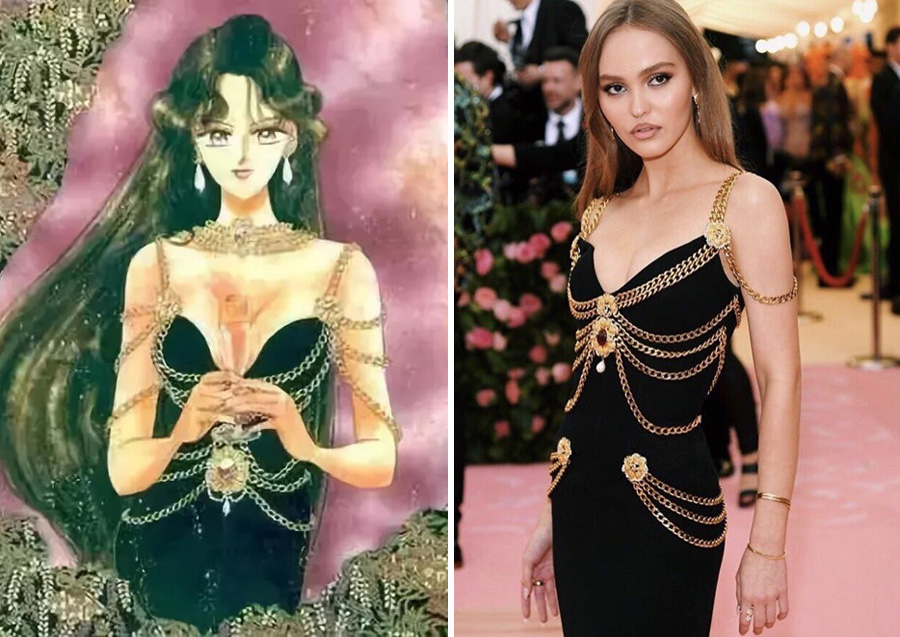 If you grew up in the 90s you’ve probably seen your fair share of
Sailor Moon anime and maybe even read some manga. Written by
Naoko Takeuchi, Sailor Moon became a pop culture phenomenon
that revolutionized the magical girl genre, introducing main female
leads who were actually fighting demons and various bad guys.
Starring Usagi Tsukino and a bunch of her fellow Sailor Warriors,
both manga and anime became incredibly popular – not only due to
the twists and turns of the plot, but also thanks to the characters
and their cool looks. It turns out most of the outfits in Sailor
Moon were inspired by 90s high fashion shows!

Naoko Takeuchi was
not only a manga writer, but she was also into modern fashion and art
history. Her work is filled with all kinds of references from fashion
magazines to classic art pieces. When she was designing Sail Moon
characters, Naoko Takeuchi was often inspired by fashion magazines
and runway shows of the 90s. Here we can see Setsuna rocking a dress
designed by Chanel in 1992.

The main character,
Usagi Tsukino, is a bit of a nerd and a total klutz. And yet, her
destiny is to become a fighter, to protect the innocent, and to
overcome all kinds of evil. She does it magnificently, showing off
her funny and awkward side, and we get to enjoy those marvellous
transformations. When she turns into Serenity, Usagi wears a
whimsical dress that also has a real-life reference – it looks much
like the one created by Dior in 1992.

Naoko Takeuchi
wasn’t just using high fashion references randomly – she was
genuinely into fashion! You can see it many of her designs, manga
cover spreads, and illustrations. If you think that many of them have
a Vogue-esque feel to them – you are absolutely right! Some of the
poses, looks, and colour palettes she used were an homage to fashion
magazine covers and ads. Wicked Lady has a lot in common with Yves
Saint Laurent’s OPIUM ad.